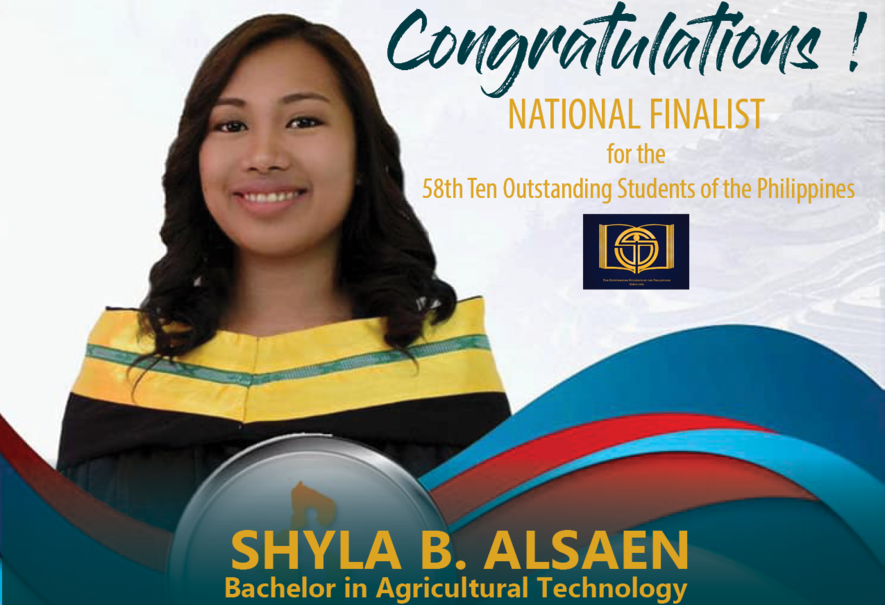 SHYLA ALSAEN never expected to see her name included in the list of National Finalists of the 58th Ten Outstanding Students of the Philippines (TOSP), alongside the names of students from UP Diliman, Ateneo de Manila University, De La Salle University, Saint Louis University and other famous universities across the Philippines.

She stated, “I am also asking myself why I made it to the national final list.” Her unassuming nature, coupled by her academic achievements and community engagement, certainly worked to her advantage that helped carve her path towards her TOSP success. This feat is another one for the books, so they say, that an MPSPC student and graduate was recognized in the national arena for exemplary academic achievement, service to the community and strong leadership skills that embody a TOSP awardee. Nowadays, the persistent trend of MPSPC’s successes are not surprising anymore.

Shyla grew up in the quiet barangay of Dacudac, Tadian and she attributes her TOSP feat primarily to her family story which is no different from the many success stories that start from humble beginnings. Molded within the confines of their humble abode, she learned to live a life that was just enough, but this lifestyle has taught her the virtues that she constantly uses as her weapon in every battleground that she enters. Shyla’s father is a carpenter and her mother is a differently abled housewife whose meager income could only support her and her two other siblings’ basic needs. For her to save from spending for the cost of a boarding house and food to sustain her daily needs while studying at the Holy Rosary High School in Kayan East and in MPSPC – Tadian campus, she lived with her relatives and grandparents, her foster families who provided her shelter and food. She embraced this situation, and she sacrificed her life’s convenience without any complaints and objection because her heart throbbed more towards making her younger siblings’ lives better through their parents’ full support to them. She worked her way out of difficult situations by protracting her determination to support herself through whatever means without compromising her principles in life that rest upon those virtues that she developed in her lifetime.

The story of Shyla is not complete without her dedication to serve the academic and social community where she lived and flourished like a beautiful, thriving flower that lightens up the day. In MPSPC, while completing her Bachelor of Agricultural Technology degree, she led the Supreme Student Council in the Tadian campus but climbed her way up to becoming the Student Trustee of the College’s Board of Trustees. She has previously served other school-based organizations like the College of Forestry Students’ Organization and the Tala, the campus’s official student publication. Shyla proudly admits that her MPSPC life and education contributed well to her TOSP achievement. She stressed, “MPSPC believes in her students’ abilities and potentials, and pushes her students to reach greater heights despite imminent challenges. The quality education that I obtained from the College is the very reason that I want to give back to her so that I can sustain the best practices within me and share them to the next generation of students.” Shyla’s nomination to the TOSP had its own challenges. Her bidbook during the regional screening was completed on the scheduled due date and was brought to Baguio City at around 6 pm to beat the 12 midnight deadline. Her support team had to find someone else to nominate her because of some indifference in other people’s perspectives towards the TOSP program. But like any other success story, these challenges turned into a victorious achievement.

At the Holy Rosary Catholic School, she lived a Christian life not only by fulfilling her daily obligations but also by working as church sacristan, convent girl and the youth coordinator. At present, Shyla is also an SK Kagawad with a 3-year term, and she considers this position as an opportunity to broaden her circle of influence towards working for significant and relevant youth programs. Indisputably, her service to the community is effervescent and pulsing, and this certainty earned her a spot in the national list. Behind all her triumphs, her genuine community service and her successes, Shyla emphasized that for most of the time, she remained humble because her mother unfailingly reminded her that humility is the very reason why God keeps her and constantly blesses her with good things.

She hopes that her story can touch other people’s hearts and can influence the lives of her fellow youth. Her success story embodies the essence of determination because she believes that success is not dependent on one’s economic status in life. She graduated out of her strong fortitude, and in fact, her sacrifices and the virtues that she lived with provided her the very foundation of her success.//