To concretize this in the higher education, the first higher education summit on gender issues was held on October  12, 2011 resulting to the Gender and Development Accord of the Philippine Higher Education institutions with the declaration of commitment and partnership where Mountain Province State Polytechnic College is a signatory.

A prime institution advancing gender and development in the Indigenous Peoples community. 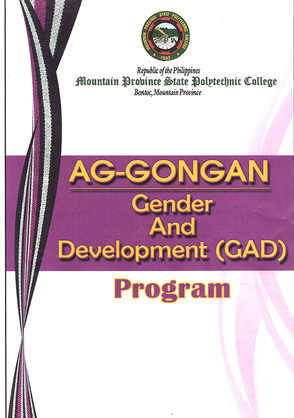 A Gender Responsive college along its fourfold function with operative and equipped machinery.

1.  To increase the consciousness on gender, poverty, and human rights issues in the various programs of the college.

2. To establish a repository for gender related research publications, extension materials and other forms of literature on gender and development.

3. To help provide women more access to knowledge resources and networks enabling them to participate actively and effectively in decision making both in the home and in the community.

4. To mainstream the celebrations and successes in gender equality, empowerment of women, poverty alleviation, violence against women and children and GAD best practices.

5.  To organize and strengthen the enabling mechanisms of GAD like established Violence Against Women Desk, data base, etc.

7. To organize operational and gender-sensitive faculty and staff unions.

Gender and Development refers to the development perspective and process that are participatory and empowering, equitable, sustainable, free from violence, respectful of human rights, supportive of self-determination and actualization of human potential. It seeks to achieve gender equality as a fundamental value that should be reflected in development choices; seeks to transform society’s social, economic, and political structures and questions the validity of the gender roles ascribed to women and men; contends that women are agents of development and not just passive recipients of development assistance; and stresses the need of women to organize themselves and participate in the political processes to strengthen their legal rights. (MCW)

The term “gender mainstreaming” came into widespread use with the adoption of the Beijing Platform for Action (PFA) at the 1995 UN International Conference on Women. It represents an attempt by gender advocates to build on the successes of the past and addresses some of the challenges. It attempts to combine the strengths of the efficiency and empowerment approaches within the context of mainstream development. As stated in the Gender and Development hand book, mainstreaming gender equality is a commitment to ensure that women’s as well as men’s concerns and experiences are integral to the design, implementation, monitoring and evaluation of all legislation, policies and programs so that women and men benefit equally and inequality is not perpetuated. The ultimate goal is to achieve gender equality towards development. Gender mainstreaming is integral to all development decisions and interventions; it concerns the staffing, procedures and culture of development organizations as well as their programs; and it forms part of the responsibility of all.

In the Philippines, efforts to make governance gender responsive are promoted though legislation such as the Magna Carta of Women (MCW) which mandates non discriminatory

and pro-gender equality and equity measures to enable women’s participation in the formulation, implementation, and evaluation of policies, plans and programs for national, regional, and local development. The Philippines is one of those countries which have recognized the talents and the crucial participation of promoting the integration of women as full and equal partners of men in development and nation building and development. (Primer on Gender Mainstreaming and Institutionalization in the Budgeting Process, 2002)

Mountain Province State Polytechnic College has undertaken various efforts in gender mainstreaming and development on policies, programs and strategies along with the four fold functions of the institution- instruction, research, extension and administration. It aims to respond to the gender issues namely: marginalization, subordination, stereotyping, multiple burden and violence against women and children.

The GAD Program will provide a framework in mainstreaming the college towards becoming a gender responsive agency. It was approved  by the Board of Trustees (Res. No. 073, s. 2014) It also contains the 5 year development program starting 2014 – 2018. Inclusive also is the Women and Children Protection Desk. Generally it is the establishment of the machinery for an affirmative action in the elimination of the gender biases.