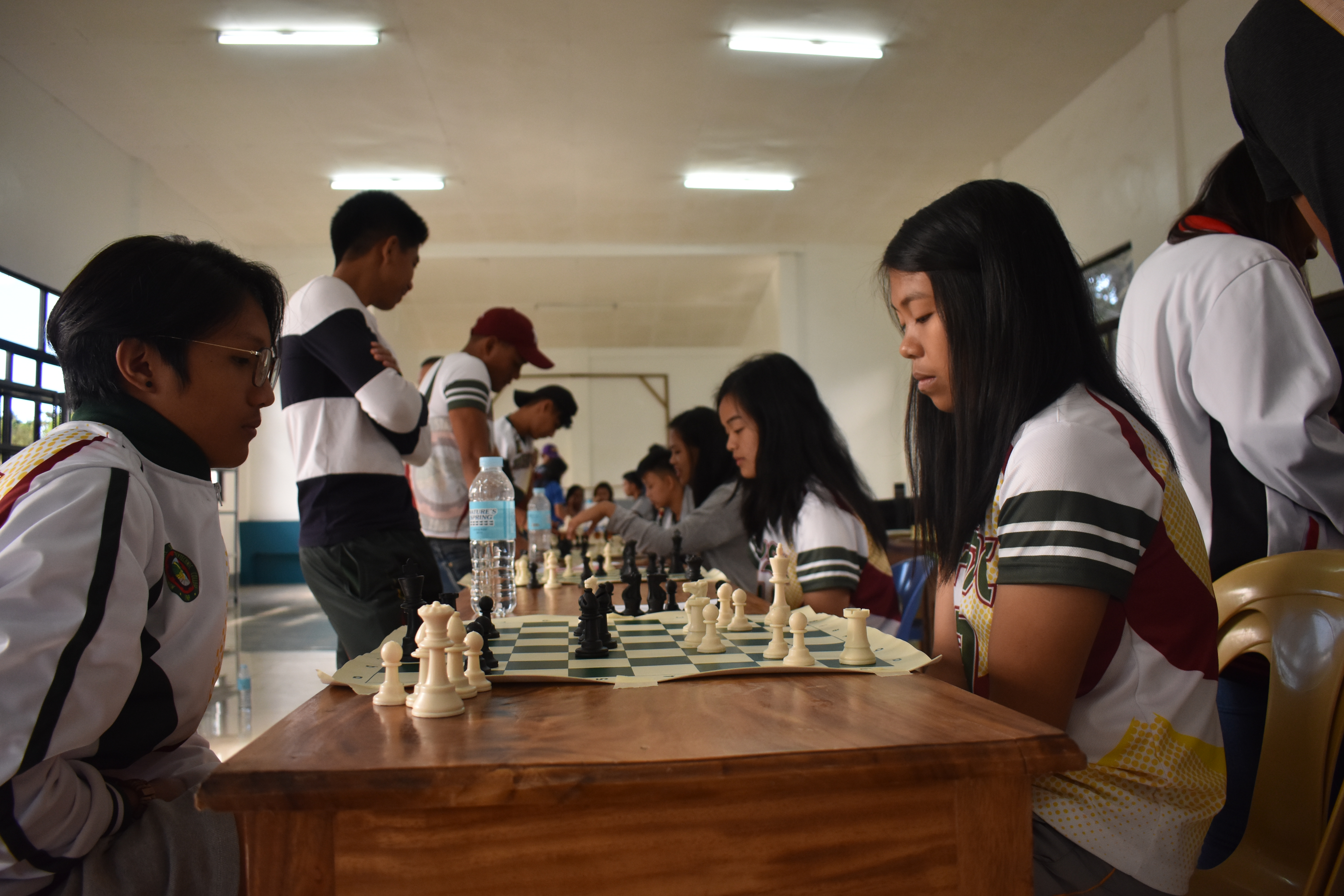 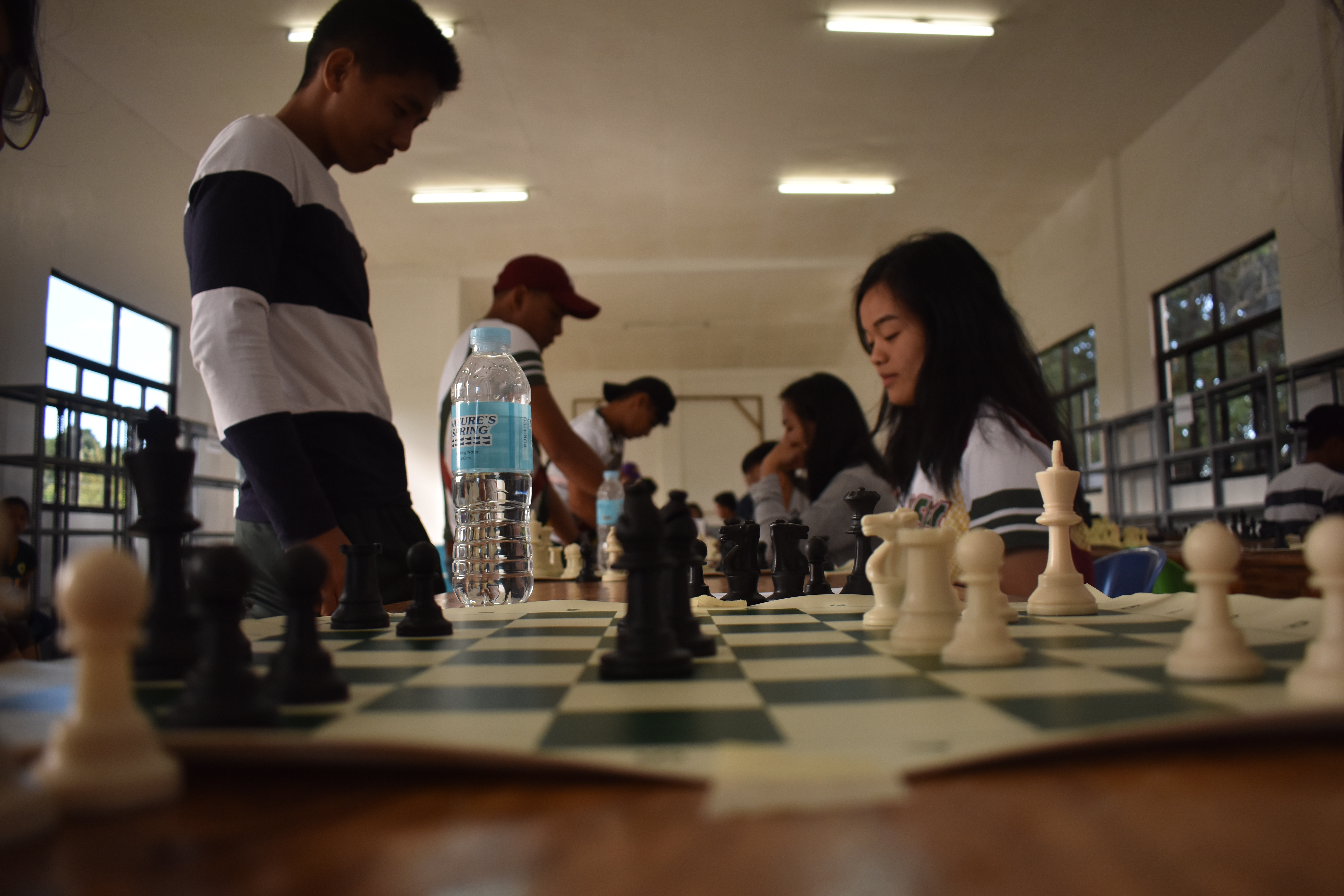 Silence. Except for occasional punches on the clock, this "game of the genius" lingers silently for not less than 45 minutes to two hours. Halfway through the game, a player from Ifugao State University awaits while the Mountain Province State Polytechnic College's contender decides which move to make.

He touches the queen, releases his hand and the opponent reminds him of the touch-move rule. He is then forced to make a move. The game continues for thirty more minutes with only silence between them.

Not your ordinary sport. To many, chess is not a sport. No running, jumping, hitting, diving or any of that sort. But there's analyzing which pieces to move, planning a counter-attack at the instant and defending the king against checkmate.

While indeed chess does not involve physical prowess, it sure entails mental dexterity. "It is a battle of the nerves," shares Mr. Emerson Olod, the MPSPC Chess Men Coach. Men and women chess players from KSU, BSU and MPSPC also add that it's the mind that does most of the work.   The mind works fast to be able to make a plan as the game ensues. "One wrong move can decide the game, and one pawn can win the game", Mr. Olod added.

In the world of chess, a single move is crucial. This discourse proved to be true as one contender from KSU shared how he lost a game against BSU. Claymark Polano shared about his loss during one of hs games, "Wrong move.. pag na-wrong move, diretso na yun. No more defense". Other players leaving the playing area after their game agreed to this. That one error costed them their chance to moving closer to the gold.

But while chess requires the mind to think fast and judge wisely, it also covers how the players learn tricks to pressure their opponent. As the game continues, the player reacts defensively to the opponent's moves and attacks while altogether finding ways to intimidate the other. Harold Tumamman, a KSU Civil Engineering student and newbie at chess said, "It's only quiet in our surroundings, but it's not quiet in the mind."

Whereas any type of sport is considered challenging and involves pressure, chess also tires its players, just like any other physical sport. "Mapapagod ka din mentally," "Hindi ganon kasimple," "Maraming dapat imemorize," were some of the sentiments of the players. In fact, while some of the players were resting outside the venue, they can be overheard saying how tired they are of one game only. This shows how despite being in a physically inactive sport, it does take a toll on the mental aspect.

Silent game, loud quagmire. Though chess players aren't faced with profuse sweating, sun burns, sprained ankles, cramps, and sore muscles, they still do face resounding troubles in the sport. For one, not knowing how to deal with intense pressure and nervousness may become the reason for losing a game, as shared by Florina Caday, a BSU player. The pressure and nervousness may stem from lack of experience. Tumamman added that even when playing with different opponents adds to experience, it still does not take away the fact that they get nervous with each game and the doubt of whether or not they did the right move lingers. This leads to the second challenge which is facing defeat.

"We want to be one of the best," Polano bares. With being the best comes the trouble of planning to defend strongly and attack aggressively. Working under the clock, an appropriate defense and attack sometimes look feeble, but their practices remind them that they can surpass one game at a time.

Interestingly, another challenge chess players face is overthinking. Because this is a mental game, they are at risk of thinking too much while the game is going on. "Pag nag-ooverthink, [may tendency] nakakalimutan na may better move pala", quipped Caday.

Another constant challenge troubling the players, according to coaches, is discipline. As with other games where players lacked discipline, it doesn't stray far with chess. "Kahit na ikaw ang pinakamagaling, kung walang discipline, wala ding mangyayari", the MPSPC coach voiced. Accordingly, the discipline should come with their motivation to continue doing better with every game.

Choosing and Sticking with Chess. Despite incessant and expected challenges, the chess players are firm in sticking to this sport. "Masaya siya, kahit tahimik lang," shared Jony Wanawan. "It's a challenging game, and because of this it has contributed to my studies. I learned to think critically and develop problem-solving skills," added Tumamman. To this Polano agreed, saying "mahahasa talaga ang pag-iisip".

Chess teaches us that not only loud games are the ones interesting. Silent games, like chess, also provide puzzles that keep the excitement going. Although silent, it adds all the more to the enticement of seeing whose king will first fall. The athletes and coaches show how even when people don't talk about the game as much, it's still a sport - an interesting sport and will continue to do so. // Sylesia Pangesfan