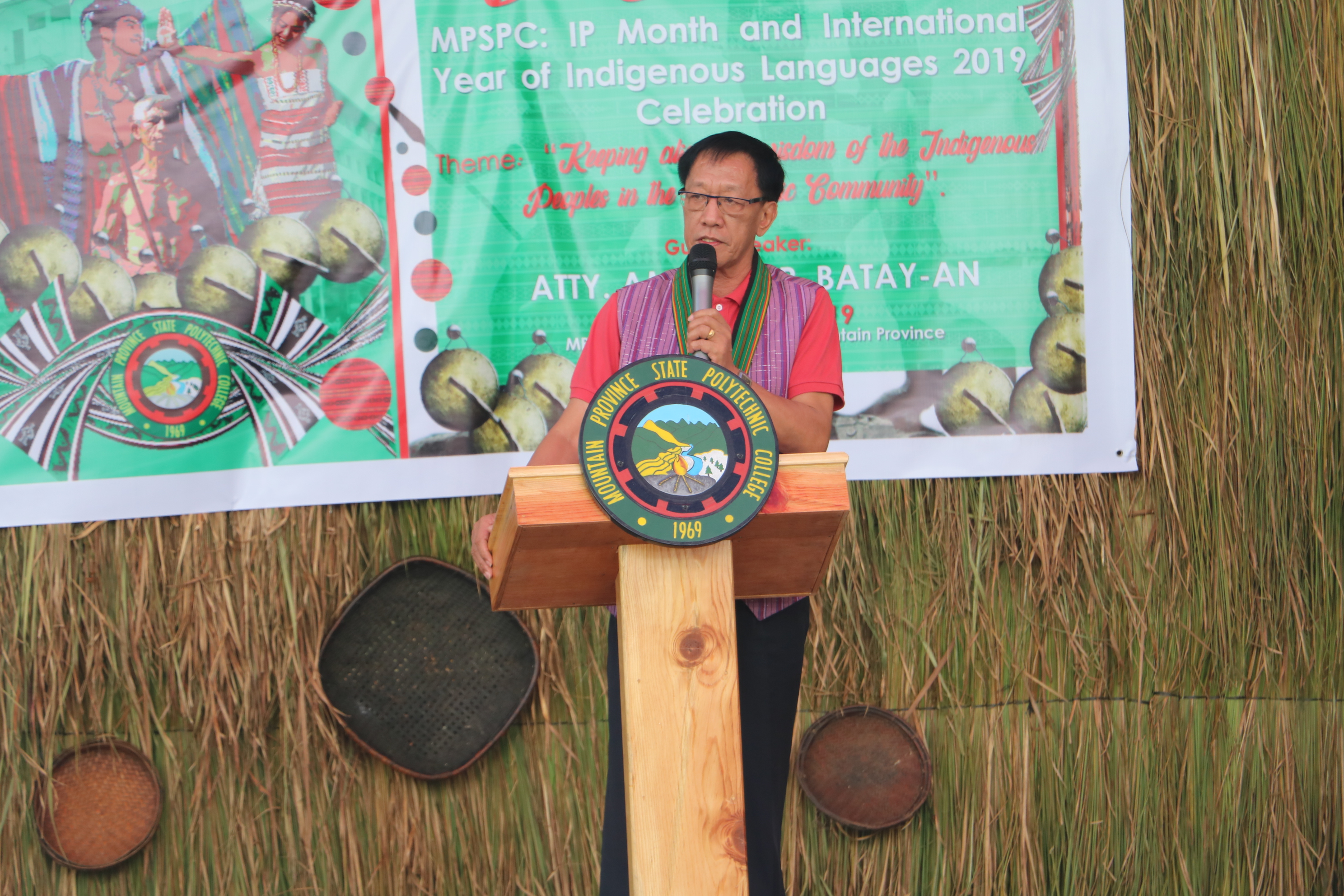 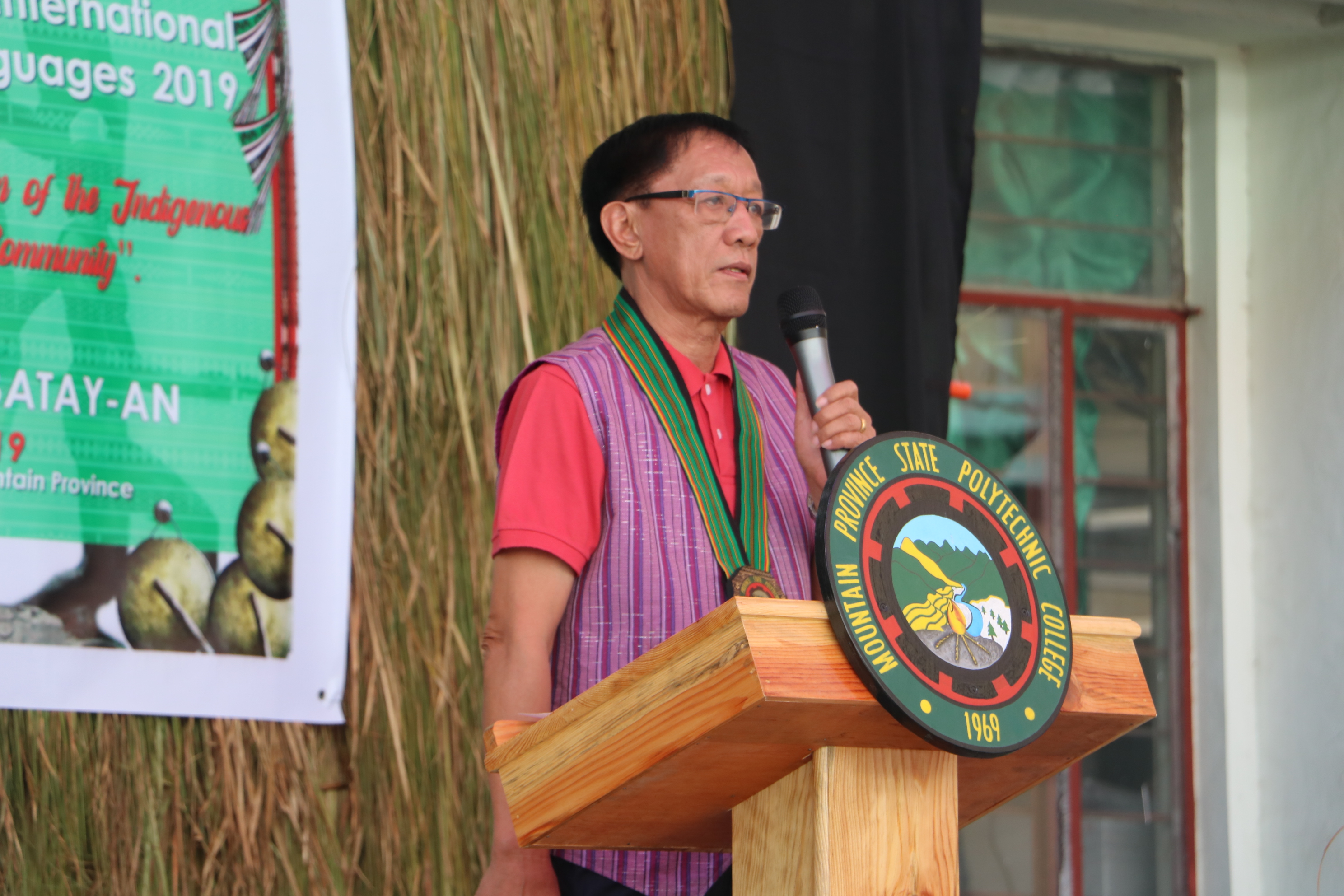 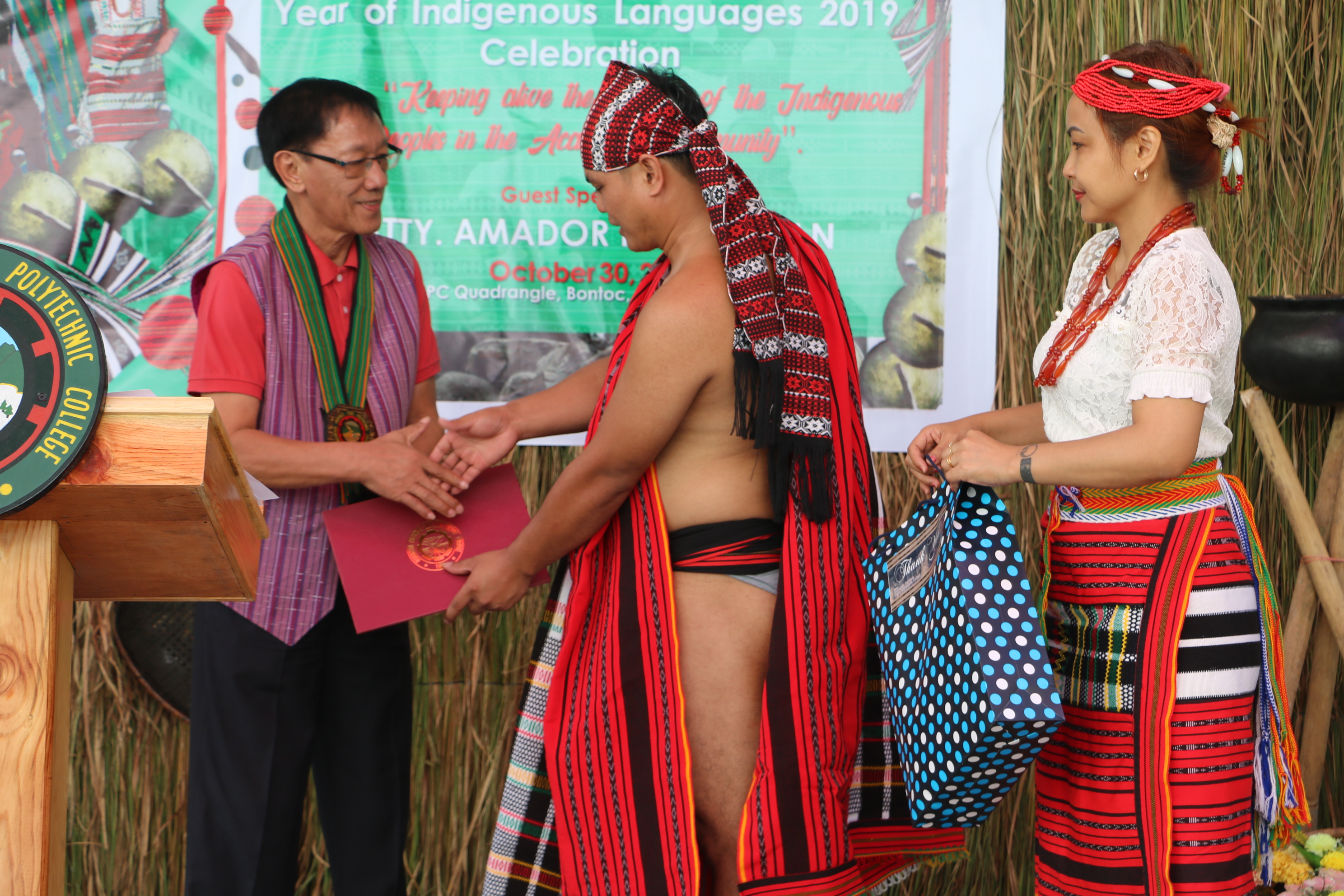 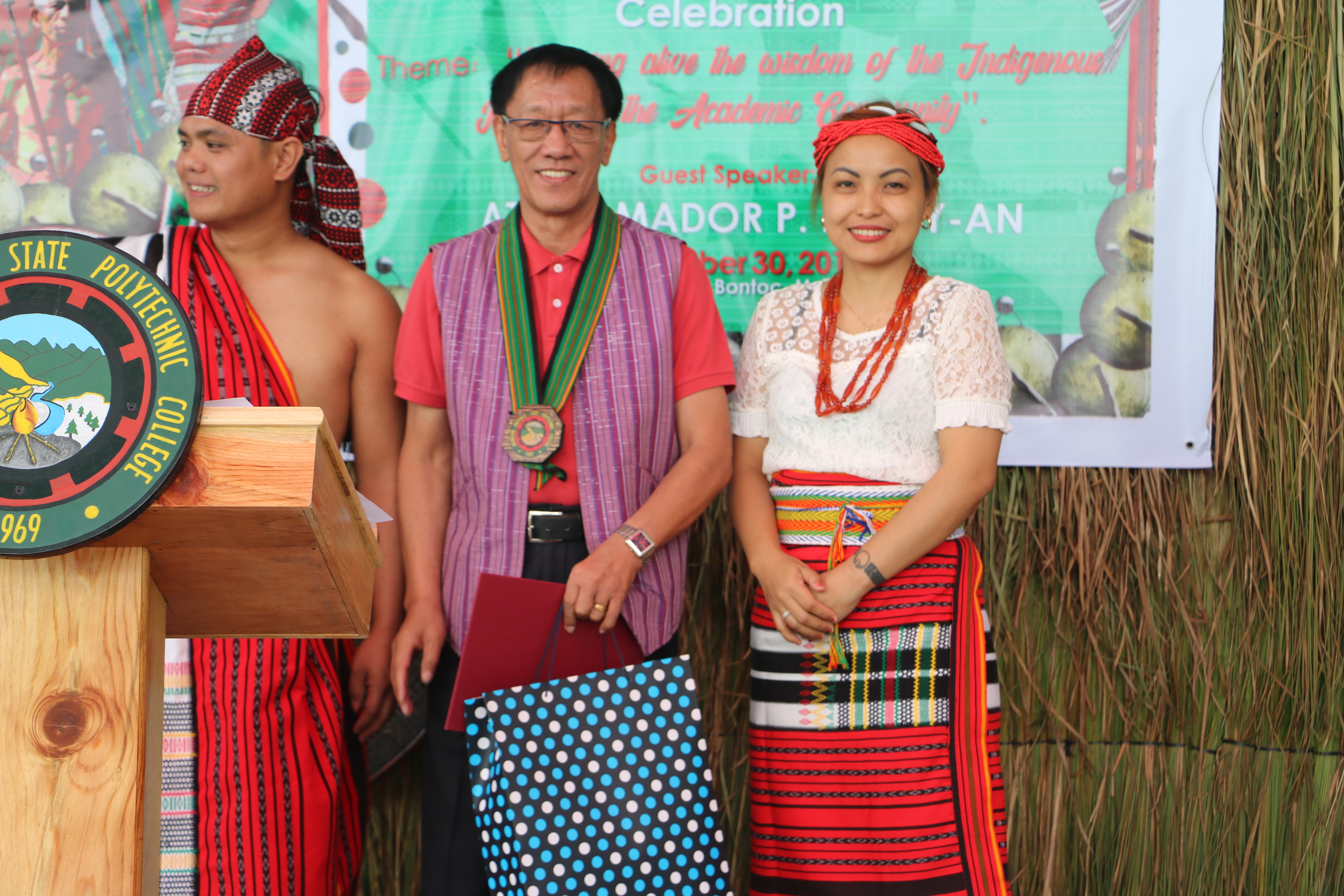 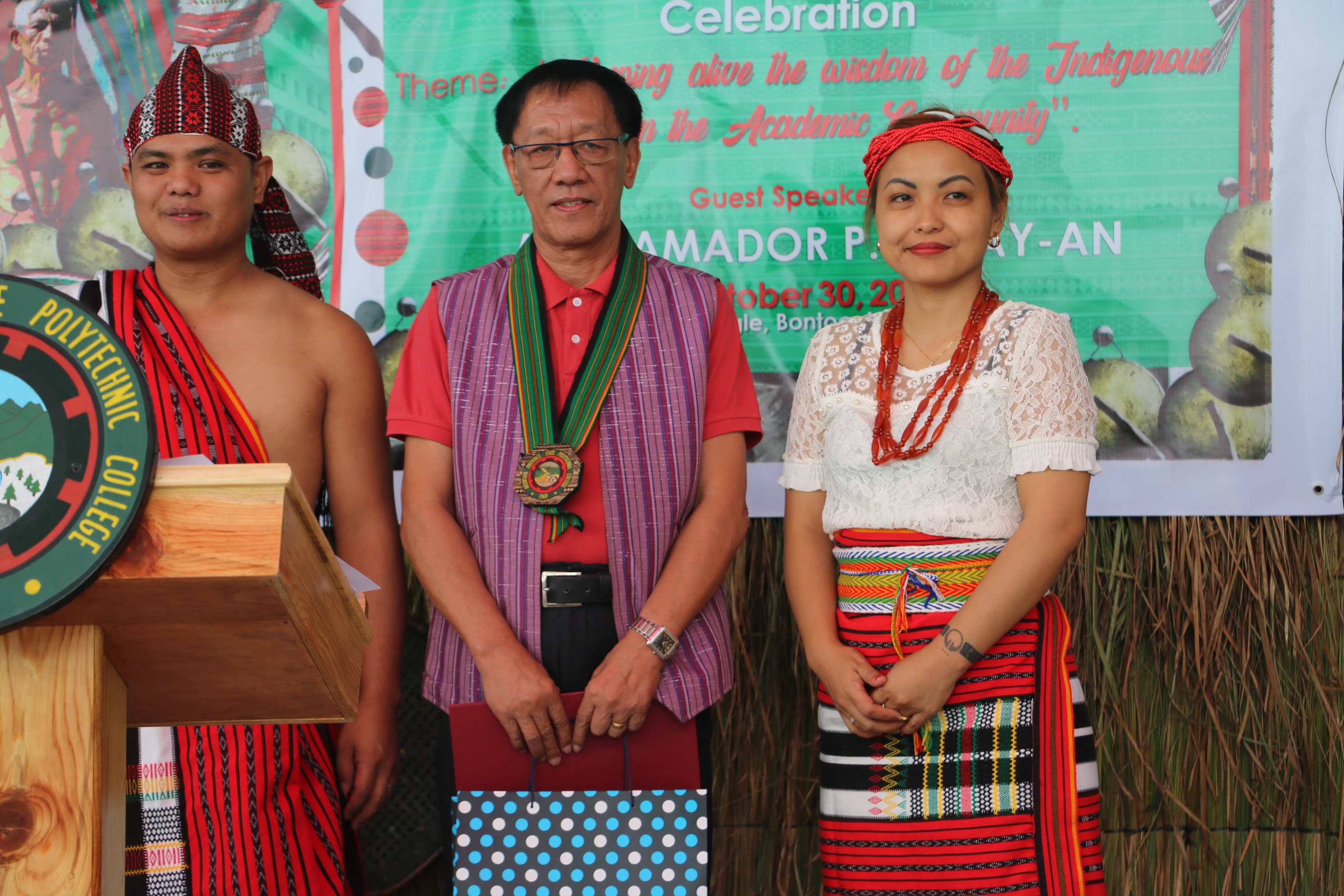 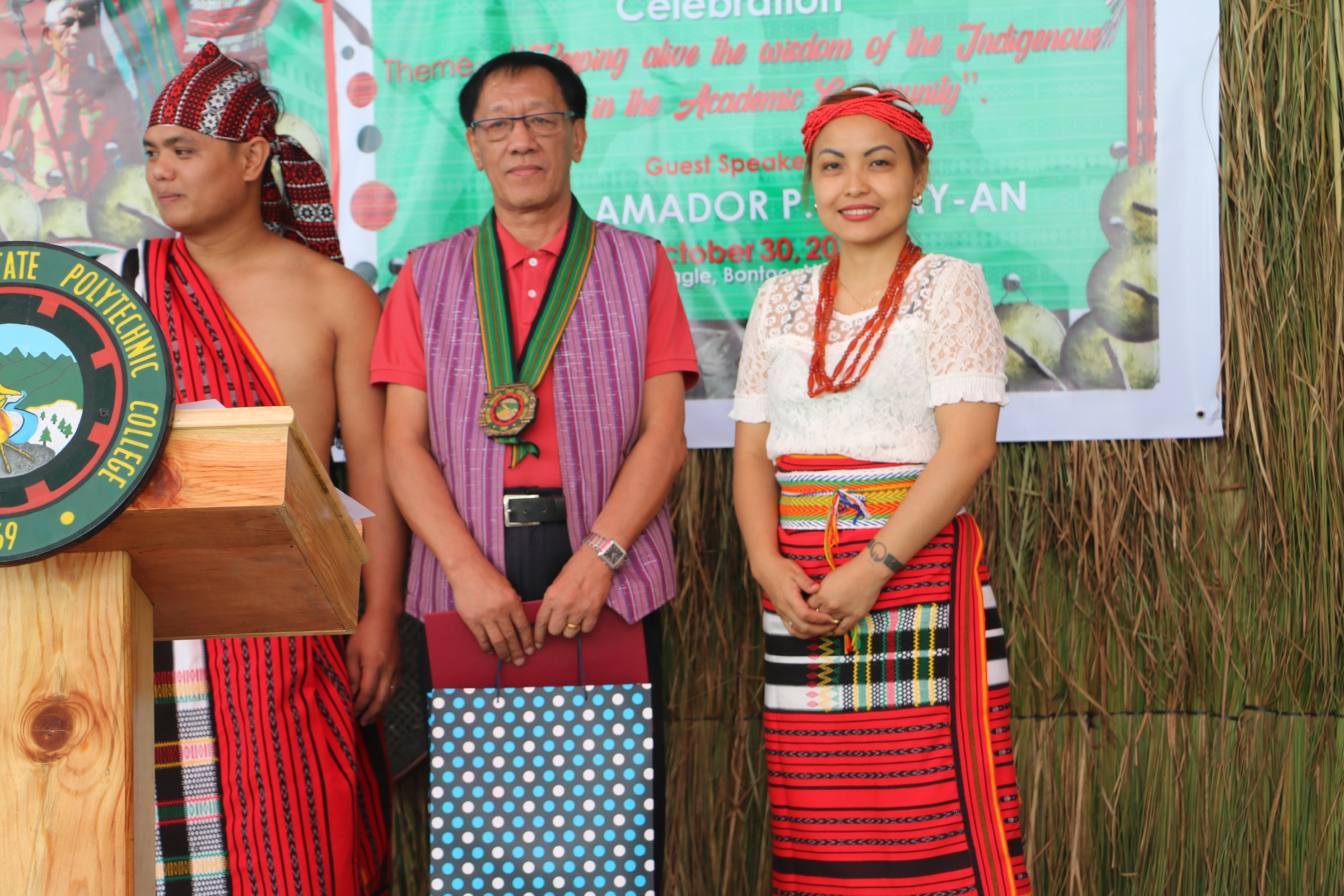 The commemoration of the Indigenous Peoples (IP) Month and the International Year of Indigenous Languages in MPSPC was received with unfaltering enthusiasm and gusto.

Eagerness among the MPSPC family members was evident as they all paraded the streets in their traditional and modern ethnic garb and gathered at the College quadrangle that was enveloped with the smell of burning wood and complemented with the resonating sound of the gongs in varied rhythm and beat. The dominant aura during this very moment was more than jovial as the color of peoples’ traditional wear struck by the sunlight pitched a display of varied hues that matched the blue skies on a sunny day. On this day, many faculty members, staff and students came out of their shells and performed their greatest masterpieces of chants, stories, songs, and dances that reverberated pride for the Cordilleran culture. Capturing the attention of many were our students representing the different geographical organizations who staged authentic story telling or dad-dad-at, rehearsed and on-the-spot, and such magnum opus uncovered many talents and gifts that students have long kept from public. The students’ confidence on stage was an antithesis to their limited self-assurance when navigating the classroom experience. It was a great revelation that MPSPC is indeed a powerhouse of talents. More importantly, it was also a disclosure that when students have the opportunity to represent their culture and traditions in creative ways, they can surprise us with what they can do.

Highlighting the celebration was a wide array of culture-based performances. The students’ cultural arts group featured an adaptation of Lumawig’s folktale on finding a bride; different geographical organizations presented day-eng ya dad-dad-at which was conceptualized by the Sociocultural Affairs Office as this year’s motif. Students performed chants or day-eng from eastern Mountain Province, western Mountain Province, Sadanga and upland Bontoc. Meanwhile, students also showcased story-telling through a chant or dad-dad-at from upland Bontoc, Bauko, Sadanga, and Natonin-Paracelis.

To add to the festive mood, the general services office staff cooked and served food in the traditional way – winnatwat – while some groups of students displayed their prowess in cooking traditional cuisine from their respective localities that used Igorot trademark like tinakhang or inasin (salted, sun-dried pork), tapey (rice wine) pinikpikan (roasted/burnt chicken) and kutti (small shells). The day ended with the resounding echoes of gongs beaten in harmony that filled the air in the College quadrangle, as if a wedding or a festival was taking place.

But then again, a celebration of culture and tradition does not start nor end with a display of aesthetics and art. As Atty. Amador Batay-an, the activity’s guest of honor and speaker emphasized, “When this program ends, it should not be the end of celebrating, honoring, and respecting culture. We should celebrate ethnicity everyday and everywhere.” A commemoration of the essence of culture and language has deeper implications on the role of the academe in putting forward a critical means of highlighting culture and ethnicity.

In this day and age when most people and their practices are largely defined by modernization, consumerism, and globalization, the chances of cultural preservation might be slim; however, it is not impossible. Language, culture, and identity are highly inter-related. How we speak and how we perpetuate our cultural practices define our being. As VPRGL Dr. Venus Fagyan, representing the College President during the program, underscored in her message, “the United Nations argues that indigenous knowledge systems and practices are a repository of peoples’ identity, cultural history, language, traditions, and memory.” In other words, we cannot overemphasize the essence of culture because it is a fundamental part of our being that can never be lost nor stolen from us despite the external force that threaten them. In MPSPC, these activities prompt us to reflect on our role in the preservation of culture and language. In fact, Atty. Amador Batay-an, expressed that as far as he knows, MPSPC is the only school, the only single institution that celebrates IP month. While this information connotes the College’s persistent efforts towards the promotion of indigenous peoples’ education, it also challenges us further into living up to the expectation that MPSPC should be a center of Cordilleran culture across instruction, research and extension, and governance.

“The College leadership has a pragmatic approach to language and cultural preservation through its major thrust encapsulated in HERITAGE”, thus expressed Dr. Fagyan. This approach is manifested in the recent infusion of P5M from CHED for the establishment of the IPED Center; the advancement of research studies that focus on the IKSP and their dissemination to a wider audience; and the MPSPC Global 22 or the internationalization plan that is heavily rooted in the local culture through home-based internationalization. Dr. Fagyan ended her message, “As you observe, compete, learn, and reflect, you are saving the world.” The noble causes for these celebrations in MPSPC could indeed endorse our genuine desire to be an advocate of culture that is integrated to our academic practices.